Bing & Other Google Search Alternatives: Why You Should Care 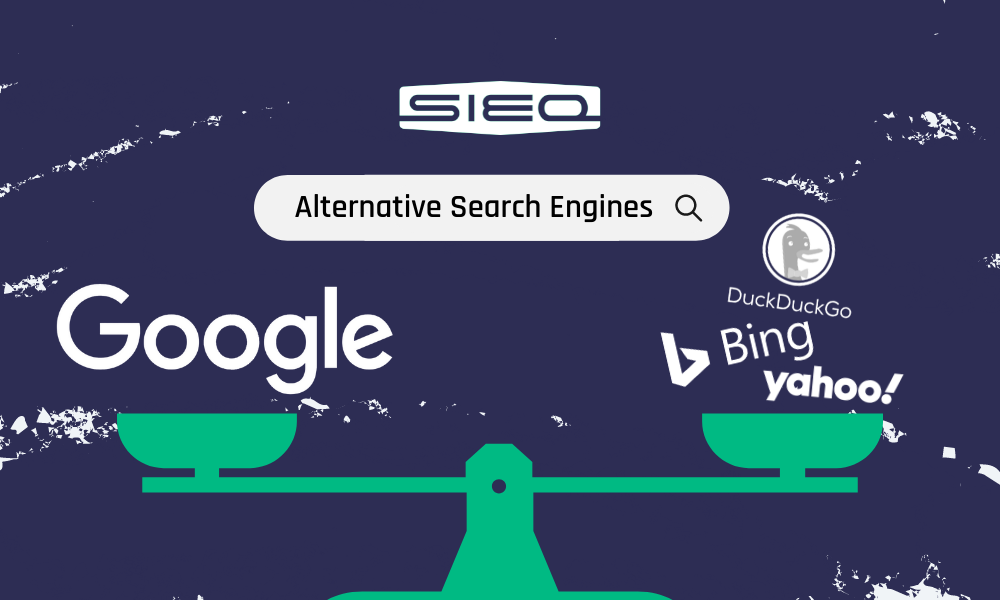 When it comes to search, whether we’re talking paid ads or directory listings or organic results, we always have to talk about Google first. Google is by far the biggest and most recognized search engine out there, and no shade to the other guys, but… it’s not even a close race. With more than 90% market share, it’s not hard to understand why Google is our top priority (along with pretty much every other SEO or digital media specialist out there). Make Google happy, and you’re going to see some trickle-down to other search engines as well.

Okay great, I’m glad we got that out of the way. Now, with that being said… just because Google is the most important search engine to focus on doesn’t mean there aren’t opportunities elsewhere that you could be missing out on by only looking at Google. Plus, you have to keep in mind that everyone is focusing on Google… so expanding your spotlight just a little bit might end up being that extra push that sets you apart and pushes you to the top.

We’ve been keeping an eye on some alternative search engines, and several of them have been steadily climbing the ladder of popularity to bridge the Google gap just a little bit more. When we see that spike causing an upward organic trend, that gives us a good indication that we are likely to see success from paid media on these channels as well.

Let’s talk about some of the alternative search engines that are on the rise and take a look at how they differ, what kind of appeal they have, and why you should care.

If you have a search engine in mind when you think of Google alternatives, there’s a good chance it’s Bing. While it may not be the search giant that Google is, it offers many of the same functions and even has the edge on a few things. One of those things is image search.

Bing is much more visually focused than Google, with a huge emphasis on photos and video content. You could even make the argument that Bing is more advanced and more intuitive than Google when it comes to the visual aspect of search. It offers features like video previews, which you can get simply by hovering over the video thumbnail (audio included!) and saved collections that users can reference later. It also leans into AI search a bit more, including pretty accurate object detection.

Beyond the exceptional image search function, Bing offers users the opportunity to acquire points while searching. Those points can then be used in Windows and Microsoft stores, which is enough motivation for some to use the search engine exclusively.

Some searchers might not have made a conscious decision to use Bing instead of Google (or might not even realize it!), but there are a number of voice and text search devices that use Bing as a default. That list includes devices with Alexa or Cortana, and most Microsoft products including Windows computers, Xbox, etc.

Unless you’re new to the internet, you’ve probably been somewhat familiar with Yahoo for a long time. You may even remember a time before Google (to the wayback machine!) when Yahoo was totally all that and a bag of chips. If you do remember that, you probably also remember witnessing Yahoo's seemingly unfortunate decline over the years. With the rise of Google, it was pretty hard to miss.

Because of that, it’s easy to dismiss Yahoo as a serious search engine now… but we really just need to look at Yahoo through a different lens. Sure, you may have swapped your old Yahoo email address for a Gmail one, and you may not be heading to the site daily for your morning news updates, but that doesn’t change the fact that Yahoo is still the third-largest search engine after Google and Bing. That’s nothing to scoff at!

Speaking of Bing, we really have to talk about these two together to get the full picture. Yahoo has been powered by Bing for more than a decade now, and the two of them together cover quite a bit more than it may seem when looking at them individually. This also means that when you optimize for Bing, you’re also optimizing for Yahoo.

Yahoo specifically has its perks too-- it may not be as visually appealing as its buddy Bing, but it attracts a lot of searchers with interest in the News, Sports and Finance categories.

With all the chatter around data privacy these days, we couldn’t leave off DuckDuckGo. The appeal of this search engine is largely about privacy. DuckDuckGo doesn’t collect or store any of your personal information, so it’s a safe way to search without giving up your info to those tiny little people who live inside of your screen. For anyone who wants to keep their browsing habits and personal identifiers to themselves, this search engine is a solid option.

When it comes to ads, that does mean that you can’t target people on DuckDuckGo, but you can serve ads related to what those people are searching for. If your focus is mobile, DuckDuckGo definitely shouldn’t be overlooked. It is the second most popular mobile search engine in the U.S. (Take a wild guess as to what the first one is)!

DuckDuckGo also sources from Bing and never from Google, so with the combination of the three aforementioned alternatives, you have a pretty powerful trifecta.

Is it worth it?

If you’re trying to figure out whether branching into other search engines is worth it for your business (whether that’s placing ads, hosting listings or just optimizing organic content), it’s important to understand your audience.

If you know you’re targeting mostly fast-moving young people who search exclusively on their phones, sticking with Google may be the best use of your time and resources. For many of our equipment dealers and agriculture companies, that’s not the case. While Google pretty much completely dominates the mobile realm, Bing and Yahoo take close to 10% of desktop searchers in the U.S., and that’s a pretty good chunk that shows no signs of dropping any time soon.

If your audience is a good fit, you will probably even find that your traffic will convert better on these search engines than it does on Google due to the fact that many of the users are older (and, presumably, have a bit more money to spend).

If you’re unsure, ask your marketing team about opportunities to branch into other search engines. We’ll never encourage you to leave Google behind, but we’re always excited to explore untapped opportunities and invite someone new to the party.